Text: Matthew 12:22-37 (KJV)
22 Then was brought unto him one possessed with a devil, blind, and dumb: and he healed him, insomuch that the blind and dumb both spake and saw.
23 And all the people were amazed, and said, Is not this the son of David?
24 But when the Pharisees heard it, they said, This fellow doth not cast out devils, but by Beelzebub the prince of the devils.
25 And Jesus knew their thoughts, and said unto them, Every kingdom divided against itself is brought to desolation; and every city or house divided against itself shall not stand:
26 And if Satan cast out Satan, he is divided against himself; how shall then his kingdom stand?
27 And if I by Beelzebub cast out devils, by whom do your children cast them out? therefore they shall be your judges.
28 But if I cast out devils by the Spirit of God, then the kingdom of God is come unto you.
29 Or else how can one enter into a strong man’s house, and spoil his goods, except he first bind the strong man? and then he will spoil his house.
30 He that is not with me is against me; and he that gathereth not with me scattereth abroad.
31 Wherefore I say unto you, All manner of sin and blasphemy shall be forgiven unto men: but the blasphemy against the Holy Ghost shall not be forgiven unto men.
32 And whosoever speaketh a word against the Son of man, it shall be forgiven him: but whosoever speaketh against the Holy Ghost, it shall not be forgiven him, neither in this world, neither in the world to come. 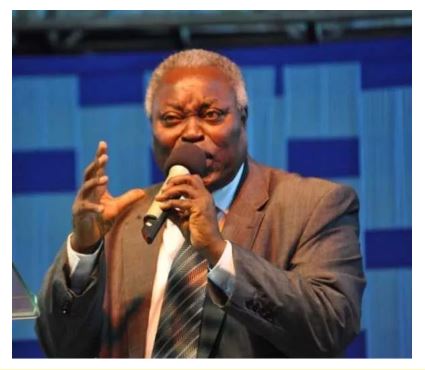 33 Either make the tree good, and his fruit good; or else make the tree corrupt, and his fruit corrupt: for the tree is known by his fruit.
34 O generation of vipers, how can ye, being evil, speak good things? for out of the abundance of the heart the mouth speaketh.
35 A good man out of the good treasure of the heart bringeth forth good things: and an evil man out of the evil treasure bringeth forth evil things.
36 But I say unto you, That every idle word that men shall speak, they shall give account thereof in the day of judgment.
37 For by thy words thou shalt be justified, and by thy words thou shalt be condemned.
Key Verse: “Wherefore I say unto you, All manner of sin and blasphemy shall be forgiven unto men: but the blasphemy against the Holy Ghost shall not be forgiven unto men” (Matthew 12:31).
MESSAGE:
Man’s heart is a metaphorical fountain with words as it streams. When such a fountain or spring is troubled, it must necessarily send forth muddy, stinking and unpleasant water. It is only a gracious salt introduced into the fountain that can remove the stink.
Also Read: Open Heaven 3 September 2019 – Keep your Conscience Alive
In the text, a man under a severe torment from Satan received a triple miracle from Christ. He was demon-possessed, blind and dumb. After an encounter with Christ, the demoniac was delivered and set free in so much that he could both talk and see. People began to praise God while shockingly, the Pharisees began to vilify Christ, attributing the miracle to the power of Satan, the prince of demons. Jesus replied that if the prince of demons used his own power to cast out demons, he would be creating civil war in his own kingdom.
Jesus went further to explain to the Pharisees that the only way a strong man can be defeated is if a stronger man overpowers him. Jesus proved that He was stronger than Satan. He reiterated the fact that God could forgive the doubts and misunderstanding people had about Him, but He (God) would not forgive their defiant rejection of the clear show of the power of the Holy Spirit.
The Pharisees were in the same position as the demoniac before his healing. They were blind spiritually; they could not see the power of God in open demonstration. They were dumb spiritually at the throne of grace as they could not give God His worthy praises. Satan blinded their eyes by unbelief which made them to sin against the Holy Ghost. Believers should be wary of malicious criticisms as this may lead them to be giving Satan the praises and glory due to God. If you believe, you too can receive your triple miracle of salvation, healing and deliverance through Christ today.
Thought For The Day: Rejection of Christ’s power grieves the Holy Spirit.
The Bible In One Year: Psalm 80–84
DCLM Daily Manna was written by Pastor William Folorunso Kumuyi; is the founder and General Superintendent of the Deeper Life Bible Church situated at KM 42 on the busy Lagos-Ibadan Expressway, Nigeria.