Be Proactive by Pastor David Ibiyeomie

Proactive behavior refers to anticipatory, change-oriented and self-initiated behavior in situations. It involves acting in advance of a future situation, rather than just reacting. It means taking control and making things happen rather than just adjusting to a situation or waiting for something to happen. A proactive person is one who acts in advance to deal with an expected or even unexpected challenge.

Prov.27:12 – A prudent person foresees danger and takes precautions. The simpleton goes blindly on and suffers the consequences. Repeated in Prov.22:3

If you are proactive, you make things happen, instead of waiting for them to happen to you. Being proactive is the first of the 7 habits of highly effective people.

Proactive people tend to be positive due to the precautionary steps that they’ve taken for potential “situations”. They have more control over their future. A proactive person acts in advance to deal with an expected difficulty

A proactive choice is based on values and principles but a reactive person makes choices primarily based upon desires, feelings, circumstances, conditions, and their environment.

Ways of being proactive


1. Be solution-focused – One of the greatest traits of effective people is good problem-solving skills. We are all going to run into problems. It’s how you handle them that makes you effective. The most effective way to handle a problem is to focus on finding a solution.

2. Be accountable and consistent

3. Surround yourself with driven, effective people.

4. Be completely honest with yourself about what is not working instead of making excuses. It is easy to stay busy and tell yourself you are taking the right steps but at the end of the day, you are only doing a disservice to yourself.

Being proactive takes time, since you have to consider your options, weigh alternatives and make your own decisions in order to achieve your goals. A reactive behavior is influenced by the environment and outside forces. 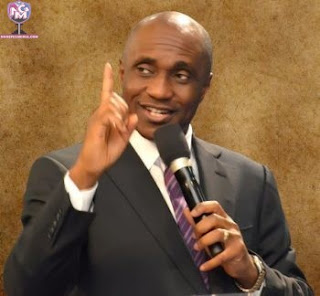 Don’t approach life’s challenges by being reactive. Be proactive. Prepare for the possibilities before they arrive.

Esther 7:3 Then Esther the queen answered and said, If I have found favour in thy sight, O king, and if it please the king, let my life be given me at my petition, and my people at my request:

Aim at identification and exploitation of opportunities and in taking preemptory action against potential problems and threats instead of solving a problem after it occurs.

Pastor David Ibiyeomie is the presiding Pastor of Salvation Ministries – Home of Success; one of the fastest growing and spreading churches in the world. He pastors millions of worshippers spread across the globe with Headquarters presently located at Plot 17 Birabi Street, GRA Phase 1, Port Harcourt in Rivers State of Nigeria.