Chelsea’s new Coach, Maurizio Sarri, has for the first time spoken about the transfer speculation surrounding Eden Hazard, in what seems to be a play down on rumors linking the Belgian with a move to Real Madrid. 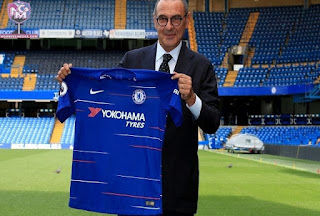 He further insisted that he is looking forward to having fun working with the Belgian and hopes to make him a better player. 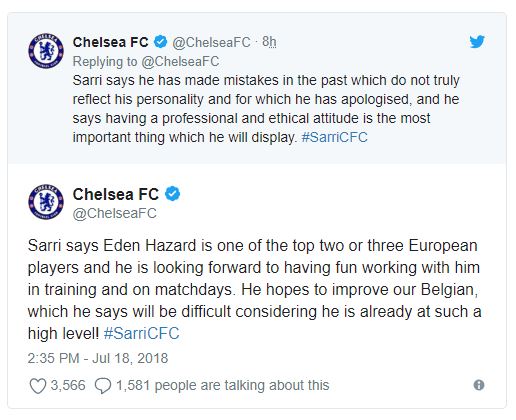 The Italian, who has replaced Antonio Conte as the Blues boss, was speaking at his official unveiling on Wednesday amid mounting speculation that Hazard could be on his way out.
Real Madrid are understood to be in talks with Chelsea over a possible £35m deal for Courtois and have also targeted Hazard after selling Cristiano Ronaldo to Juventus.
And while Sarri could offer no guarantees he would definitely stay put, he was keen to talk up the prospect of working with one of the top players in Europe.
He also said he would not speak to either player on the phone even though they are due to return to training only shortly before the English transfer window closes on 9 August.


“Clearly the players you are referring to are very high-level players and I would like to keep them,” Sarri said adding that “But a telephone call without looking them in the eye will not give me any certainty.
“I would like to meet these players face to face and talk to them and understand what the best thing is for everyone to do. Before that I would also like a player to come on the pitch for four or five days with me to have a clear idea of what the plan is.”
“Hazard is a high level player and I think he is one of the top two or three European players.”
“I would like to have fun during the week with him, this would mean good results and being competitive at the end of the season. I hope I will manage to improve him, this is very difficult as he is at a high level.”

When asked how Hazard compares with one of his former players at Napoli, Dries Mertens, Sarri added: