- April 09, 2018
This song titled More Than Enough by Michael Ajetomobi talks about the access we have through the sacrifice of Jesus to more than we would ever need both spiritually and physically. The means justifies the end with Christ because he is more than Enough. 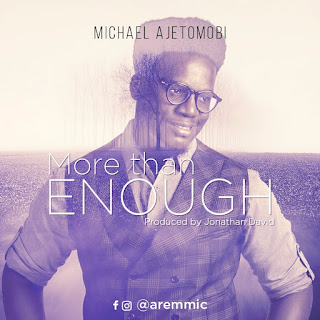 Michael Ajetomobi is a Nigerian singer-songwriter who hails from Osun State. He is a fine Christian gentleman who studied Civil Engineering at Covenant University Nigeria. Michael is a quiet and easygoing person.

He is a rising star in the music industry in Nigeria. He developed his singing talent at a young age in the choir where he played the clef before he discovered he could sing. His music influences are Daniel Johnson, Micah Stampley, Jason Nelson, and so many other great singers.

He has backed up for and still backs up for artists like Freke Umoh, Joy Adejo, Roland Ricketts and many others.
He recently released his debut Single tilted More than Enough which was produced by Jonathan David.