- April 11, 2018
Televangelist and Founder of World Changers Church International, Pastor Creflo Dollar criticizes the Church for condemning rapper Snoop Dog and his gospel album Bible Of Love.
While preaching on The Spirit Of Grace, Pastor Creflo defended Snoop Dogg’s decision to produce a gospel album and rebuked Christians who questioned the rapper’s claim that he is a born-again Christian. He pointed out that the church should focus on God’s grace rather one’s sins. 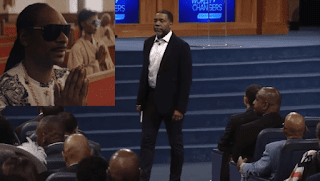 He went ahaed to say that the church’s reaction to Snoop Dogg as a perfect example of how judgmental Christians can be of people who fail to meet a perceived standard of righteousness.

“I’m gonna say something publicly. I don’t know if I’m really correct in saying this but I want to say something publicly. Recently, a man in California, he’s a rapper, in fact, he’s known as a legend, they call him, I think his nickname is Snoop Dogg. He just released a gospel album to minister to people because his grandmamma ministered to him and he had it on the inside of him. Isn’t it sad that he received rejection and flak and ‘how y’all gon’ support somebody like this after what they did and what they said?’ What’s wrong with us?” Dollar asked.