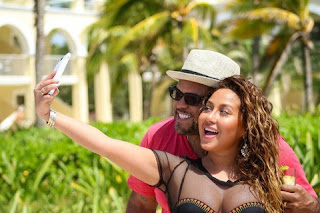 Isreal Houghton who not so long ago  announced his divorce to his wife Meleasa of 20 years has confirmed he is now dating Adrienne Bailon who is one of the hosts oh ‘The Real’. according to Israel, “I met Adrienne Bailon a bit over 2 years ago, we worked together & became friends… Our circles connected & we remained good friends. From a friendship, as two single adults we have very recently begun to explore a dating relationship.

As I previously wrote in a statement I released a while back, My marriage had been over for quite some time before going public with my divorce announcement.

As a co-host on “The Real” Adrienne has exclusively confirmed that she is indeed dating the Grammy Award–winning Christian music artist after a year of being single. Her co-hosts were on-hand to help her dispel rumours.

it will be recalled that there were reports that Israel was suspended from Joel Osteen’s Lakewood church following the divorce.
International News