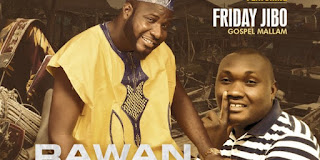 Bigdelymo oladele aka shatan yarubawa is a household name in the north eastern part of Nigeria
Since the Release of his hit song folofolo he has been ministering in different Places Both in Nigeria and Abroad. he was opportuned to share the stage with the Likes of  Sammie Okposo, Solomon Lange, Tklex, Dr Panam Paul Percy, Gwills, Yung. G. Son,  among others, his song with solomon lange “let it shine” is also another hit song

In preparation for his upcoming album Release that is titled “Letter To Oladele” which  will be premiered 8may officially.

This time around Bigdelymo is teaming up with another great northerner nigeria praise master Friday Jibo Gospel mallam in Rawan Yabo! Dance of praise# ijo ayo.