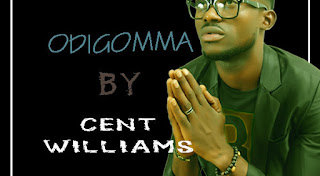 Williams Innocent known as Cent Williams has just released a new single “Odigomma”, having been on the eager move to carry on his music career to the next level which stared at an early age with his models such as “Sammie Okposo, Nathaniel Bassey, Joe Praize, Frank Edwards among others. The twenty-eight years old Cent hails from Ohozara in Ebonyi state and has been so much in love with music. He’s a singer and also a dancer to his admires. Here’s a new turn for a secular guy who now has an overwhelming aspirations for Christ as he didn’t find any pleasure in the base of secular section of music. So with such spirit, here is his new single “Odigomma” which is produced by George Daniel.

“Odigomma” is a song presented to encourages its listeners that in every circumstances in life, have the faith to proclaim, and all will be well .

In his words William said “I did this track ODIGOMMA personally for those going through hard-times because of one problem or another, hear the voice of the Lord saying my child it is alright, cry and weep no more. Listen and be blessed!”