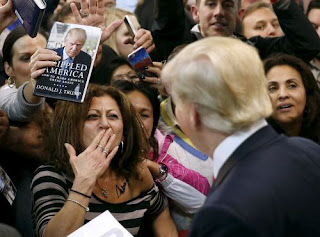 Sojourners founder Jim Wallis and dozens of other Christian leaders are condemning Donald Trump’s use of public fear and resentment throughout the 2016 election as being “a moral and theological crisis” that “threatens thenwell being” of the American society.

More than 50 prominent Christians “from across the political spectrum,” but mostly from the Christian left, have signed onto a declaration titled “Called to Resist Bigotry — A Statement of  aithful Obedience” that calls on Christians to resist rallying around “demagogic” political candidates who rely on exploiting anger and “hatred” to gain support.

“At significant times in history, however, Christians from across the political spectrum come together around political realities that threaten the fundamental integrity of Christian faith and the well-being of society itself,” the declaration explained. “Sometimes what is called politics raises moral crises, in which our faith is literally at stake in the way we respond.

“We the undersigned believe this is one of those times, and that the churches in this country, and our country itself, face such a moral threat today. We are seeing the very worst values of our nation and its history on display with a vulgar message and style,” the statement continued. “A direct appeal to the racial, religious, and gender bigotry that is always under the surface of American politics is
now being brought to painful public light.”

Namely, the declaration calls out Trump, the billionaire real estate mogul who after sweeping five primary elections on Tuesday has a good chance to win enough delegates to be the GOP nominee.

The group of Christian leaders claims that Trump, who has called for a ban against Muslimnimmigration, called to build a wall at the U.S.nSouthern border, and has been demeaning
towards women, “disrespects the dignity of women, harms civil public discourse, offends moral decency, and seeks to manipulate religion.”

“The ascendancy of a demagogic candidate and his message, with the angry constituency he is fueling, is a threat to both the values of our faith and the health of our democracy,” the declaration reads. “This is no longer politics as usual, but rather a moral and theological crisis, and thus we are compelled to speak out as faith leaders.”

The statement argues that Trump is “bringing our nation’s worst instincts” and America’s “racial sins” to the “political surface.”

“Trump’s highly visible and vulgar racial and religious demagoguery presents a danger but also an opportunity — to publicly expose and resist the worst of American values,” the leaders stressed. “By confronting a message so contrary to our Christian values, our religious voices can help provide a powerful way to put our true faith and our better American values forward in the midst of national moral confusion and crisis.”

In addition, the declaration adds that it is understandable that many Americans have anger about the direction of the country, but warns that Trump is only using the public’s anger for “his own political advantage,” not for the good of the nation.

“Trump is shamelessly using racial resentment, fear, and hatred — always dangerously present in our society — to fuel a movement against ‘the other,’ targeting other races, women, cultures, ethnicities, nations, creeds, and a whole global religion,” the declaration claims. “That stands in stark and hilling
opposition to the reconciling love of God confessed by those who claim Jesus as Lord.”

Along with Wallis, the declaration was co- signed by other Christian leaders, such as prominent Maryland pastor, theologian and author Brian McLaren; Shane Claiborne, a leading figure in New Monasticism and a founding member of “The Simple Way” in Philadelphia; Jim Winkler, president and general secretary of the National Council of Churches; Christian ethicist and columnist David
Gushee; Ronald J. Sider, theology professor at Palmer Seminary at Eastern University; and Joshua Dubois, the former head of the White House’s Office of Faith Based and Neighborhood Partnerships.