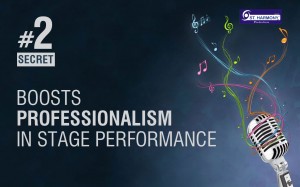 As a follow up to the previous post, I want you to understand the demarcating factor between the boyz and the men on stage. There are certain things that differentiate artistes beyond their songs alone.

Have you ever been in a vigil concert where after having so much dancing and worshiping, you get very tired and then imagine how impossible it would be for any other artiste coming up to steer the crowd again? in that same meeting, maybe at about 5am, this other dude comes up and just like magic, says the right words at the right time, the right gestures, the right songs and the accompanying musicians play perfectly in sync. Suddenly, the already tired audience, can’t help but join in for another round of dancing.

such stage control and coordination is not by chance and honestly, not just by much private rehearsals.


it requires more… a lot more. i must tell you however that following up from SECRET 1, performing before an audience continuously will BOOST PROFESSIONALISM IN YOUR STAGE PERFORMANCE…that’s the second secret.

So this means you should endeavor to have a well rehearsed live band ,play your songs in real events on stage. over time and with much practice, you will improve on stage, thus, making your “STAGE RECORDING’ more powerful and impactful.