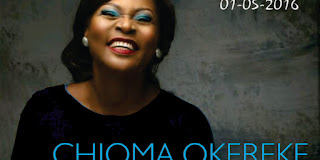 Nigerian Gospel artiste Chioma Okereke has announced the date for her new single titled “Lord You Are” which is set to be released on 1st of May 2016. Chioma Okereke is known for her sonorous and well coordinated voice. Her debut ablum “Homage to the King” was released in 2013, and was a massive success, featuring hits like Chidera.Her passion for worship drives her to reach people and encourage them to live for something greater than themselves. That is what her music ministry brings when you listen to this anointed minstrel. Her next single which we have been anticipating for will sure be a blessing to all music lovers.

About Chioma Okereke
Chioma Okereke, has struck a balance in life with career and music.  The soulful singer, actor and songwriter who cites influences from various artist accepts the call to speak the truth and pour every ounce of her being into her music, without taking herself too seriously.Raised from a family of entertainers, Chioma is the younger sister of one of Nollywood’s most successful actress Stephanie Okereke and has other siblings plying their trade in the entertainment industry.