Why 'Christian' No Longer Means What It Used To 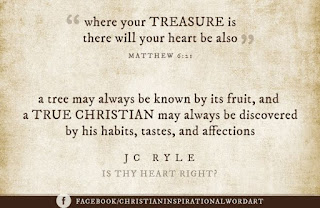 In Acts 11:26, it's recorded that this is the first time disciples of Christ were called "Christians". The entire New Testament books are replete with what it truly means to be a disciple of Christ—a Christian. In those days, "Christian" was not a complimentary or even as a neutral term for a group of people, but rather, they were called "Christians" as a derogatory term. We know this because we read account after account about the many who suffered for being named a Christian.

"Beloved, do not be surprised at the fiery trial when it comes upon you to test you as though something strange were happening to you. But rejoice insofar as you share Christ's sufferings, that you may also rejoice and be glad when his glory is revealed. If you are insulted for the name of Christ, you are blessed, because the Spirit of glory and of God rests upon you. But let none of you suffer as a murderer or a thief or an evildoer or as a meddler. Yet if anyone suffers as a Christian, let him not be ashamed, but let him glorify God in that name." -1 Peter 4:12-16, ESV


In Acts 2:42-47, we're given a beautifully clear picture of what the Church (that is, the Body of Christ) looked like: devoted to the apostle's teaching (Scripture); breaking of bread; prayer; having all things in common; sacrificially and generously giving to one another not out of compulsion, but from sincere hearts; habitually fellowshiping in the temple and at one another's homes; praising God; and the Lord added to their number daily, those who were being saved. This is what the Church should look like today, but doesn't.

We more resemble the Corinthian church—full of sexual immorality, greed, gluttony, pride, envy, strife, misuse of spiritual gifts, spiritual laziness/apathy, nominal and corrupt church leaders who neglect the flock while filling their egos and lives with mammon. Beginning with the sexual devolution promoted by Hugh Hefner in the early 1950s, leading to the women's liberation movement in the 1960s and culminating with the legal right to murder innocent lives if they're an inconvenience in 1973 with Roe v. Wade; it's been a slow fade. It's understandable that these wicked behaviors founded on wicked beliefs are fulfilling to the people of this world, but it's a complete abomination that these same wicked behaviors are being accepted, excused, and chased after by professing Christians.

Yesterday, I saw something on Twitter that grieved my heart: a list of the top 25 bestselling "Christian" books for March 2016. It's too painful to share all 25, so I'm only sharing the screenshot of the top 10 because the rest of the list is just more of the same.

I was heartbroken that Sarah Young's blasphemous and heretical book Jesus Calling, two books by well-known heretic and unbeliever Joel Osteen, the undoctrinal book about prayer Fervent by Priscilla Shirer (which the movie War Room was largely based on), and worse...adult coloring books, topped the list.

Here's what Waterbrook Multnomah (Waterbrook Press), whose membership was revoked from NRB (National Religious Broadcasters) in 2014 says about their adult coloring book Whatever is Lovely, "Color your way to peace and worship. We live in such a busy, hectic world—but what waits for you inside this adult coloring book is a way to quiet the noise, express creativity, and spend some sweet time with God. Each page features an original design from one of a dozen different artists, beautifully illustrating a contemplative quote from an inspirational writer, a beloved hymn, or Scripture."

Mind you, there are four adult coloring books that make this list of top 25 "Christian" bestsellers, and three of them are listed in the top 10. If you're interested, you can view my top 20 favorite and recommended books by clicking here: Sunny's Top 20. 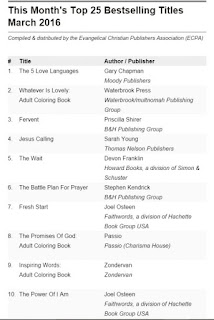 I lament to say that I know too few "Christians" who read, study, meditate and understand the Bible (in context), and too many who can only quote Scripture out of context (or can't quote Scripture at all), and get the majority of their theology from heretical books, heretical TV miniseries and heretical "bible" movies. Prior to this, they could only share what they "felt" like God's Word says to them, but now, they can also, literally, color in God's Word however they'd like.

As I consider how the Bride of Christ is shamefully defiling herself with vain and worldly philosophies, rather than cleansing and strengthening herself with the Word of God, these words from our heavenly Father come to mind, "Folly is bound in the heart of a child, but the rod of discipline drives it far from him" (Prov 22:15), "When I was a child, I spoke like a child, I thought like a child, I reasoned like a child. When I became a man, I gave up childish ways." (1 Cor 13:11), "Great are the works of the LORD, studied by all who delight in them." (Ps 111:2), "And he [Christ] gave the apostles, the prophets, the evangelists, the shepherds and teachers, to equip the saints for the work of ministry, for building up the body of Christ, until we all attain to the unity of the faith and of the knowledge of the Son of God, to mature manhood, to the measure of the stature of the fullness of Christ, so that we may no longer be children, tossed to and fro by the waves and carried about by every wind of doctrine, by human cunning, by craftiness in deceitful schemes." (Eph 4:11-14), "For the word of God is living and active, sharper than any two-edged sword, piercing to the division of soul and of spirit, of joints and of marrow, and discerning the thoughts and intentions of the heart." (Heb 4:12)

The word "Christian" used to mean someone who is crucified with Christ, someone who carries their cross daily—dying to sin and living in Christ's righteousness. It used to mean someone would sacrifice personal comforts and delights (family, friends, riches, food, etc.) for Christ rather than settle for false peace just to keep "good" relations with family and friends who profess Christ, yet practice sordid ways of living that oppose and mock Him (1 Jn 2:3-6, 3:7-10).

To the many who love Jesus Calling and other heretical books and movies, I pray you repent of your idolatry, hunger and thirst for righteousness, and grow in the grace and knowledge of the Lord Jesus (Col 1:9-12). Kill your pride and throw off every weight and sin that clings closely; hindering you from running with endurance, the race God has set before you in Christ Jesus (Heb 12:1-2).

To the few who diligently read, study, meditate and memorize the gracious, pure and precious Word of our LORD, press on and sow the good seed of faith even while you mourn, for our Father promises you comfort in your sorrows (Zeph 3:17), and an eternal weight of glory beyond comparison when you arrive Home (2 Cor 4:15-18, Heb 11:13-16).
Article Message