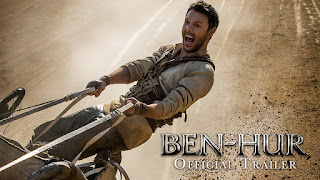 Starring Jack Huston as Judah Ben-Hur, the film follows the disgraced prince as he’s falsely charged with treason and forced into slavery by his own adopted brother (Toby Kebbell). Photo Credit: YouTube


Paramount and MGM, in collaboration with Hollywood power couple Mark Burnett and Roma Downey, have finally released the first trailer for their upcoming take on the classic faith-based film, Ben-Hur.

Starring Jack Huston as Judah Ben-Hur, the film follows the disgraced prince as he’s falsely charged with treason and forced into slavery by his own adopted brother (Toby Kebbell). He soon returns in a quest for vengeance, as a man named Ilderim (Morgan Freeman) offers to sponsor and train him to become a top chariot racer. However, he is changed forever after a series encounters with Jesus Christ.

The trailer for the upcoming faith-based film shows a dramatic race with plenty of chariots, horses and riders soaring through the air and colliding with one another.

Mark Burnett (Survivor) and Roma Downey (Touched by an Angel), who previously brought the popular miniseries The Bible to History Channel, revealed they decided to create the film after spending time in prayer.

During a conference in Nashville, Tennessee attended by The Gospel Herald, Downey pointed to the success of The Bible, Son of God, and AD: The Bible Continues in stating that she and Burnett feel “privileged” to have a platform to tell stories that glorify God and bring hope.


It’s an incredibly hopeful story,” she said of Ben Hur. “It’s been the most riveting opportunity of our careers. It’s a feast, a beautiful re-imagining of this epic story. I think that the movie in many ways is a Trojan horse, because it’s an action/adventure movie and it delivers on that, and viewers won’t be disappointed with that. It’s epic. But…it’s a story of redemption, a story of reconciliation, a story about forgiveness.”

The 1959 movie, which was set in ancient Rome, was directed by William Wyler and produced by Sam Zimbalist. It starred Heston, Stephen Boyd, Jack Hawkins and Hugh Griffith, and won 11 Oscars, including best picture.

Downey revealed that only did they hire the best stuntmen and designers to work on the 2016 film, but also have the same horse trainer and makeup artist from the classic 1959 film.

“This film has been made lovingly,” she explained, “This is a message of mercy and love and compassion and forgiveness.”