Six Reasons Why ISIS Attacks on Christians Should Be Declared Genocide 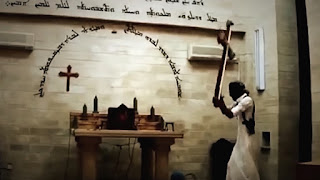 The US House of Representatives voted unanimously that groups such as ISIS are committing genocide against Christians and other minorities in the Middle East.

By Thursday, Secretary of State John Kerry must tell Congress (thanks to a separate measure) whether the State Department agrees or not.

CT asked international religious freedom experts to weigh in on whether Christians face genocide from ISIS. Or rather, is such a contentious political label really needed in order for the United States to respond to the ISIS crisis?

Here are six of their arguments for why the answer is yes.

Yes, because it will prompt international action.

“It matters because it will bring pressure—mainly moral, but some legal—on a reluctant administration to take decisive action against ISIS. If in fact this factor is what is deterring the administration from making a firm decision on genocide—one that includes Christians with other targeted minorities—that is deplorable. A genocide declaration should be a slam dunk—legally, politically, and morally—for any reasonable person or institution.” Thomas Farr, director, Religious Freedom Project at Georgetown University’s Berkley Center for Religion, Peace, and World Affairs.

Yes, because it will encourage more aid.

“[We] supports the need for a genocide resolution because additional resources can be offered to protect those targeted. The genocide convention is a treaty to which many countries around the world have ascribed, and a declaration that genocide is taking place is a new and so far unused tool to mobilize protection to the affected minorities. The failure to protect those populations suffering from genocide cannot be accepted by governments. All caring citizens must do everything possible to prod their governments to agree to protect those communities under genocidal siege.”
Ann Buwalda, executive director, Jubilee Campaign

Yes, so perpetrators can be charged with war crimes.

“Genocide is a crime under international law, defined in Articles 2 and 3 of the 1948 Convention on the Prevention and Punishment of Genocide. [We] note the urgent need for an investigation into possible war crimes, crimes against humanity, and genocide committed by all parties to the conflict in Iraq and Syria. We are calling for an expansion of the mandate of the UN Commission of Inquiry into Syria, or the establishment of an independent panel of legal experts, to examine existing evidence; to define the crimes committed against religious and ethnic minority communities in Syria and also in Iraq; to identify the perpetrators and victims of these atrocities; and to mobilize an appropriate response by the international community.”
Kiri Kankhwende, senior press officer, Christian Solidarity Worldwide

Yes, to show that we care about what’s happening.

“If Christians are not included in the genocide determination, it will have very serious repercussions. They will have no way to recompense for all of the material losses they have suffered, and in addition, it will be a signal to ISIS that the United States does not care about the Middle East Christians, and be a green light to continue their extermination. … It also matters because it is genocide. And unlike some regimes and/or groups that have committed genocide (e.g. Sudan’s National Islamic Front Regime), ISIS is not trying to hide it. It is flaunting it, and using it as a recruiting tool. If we allow that to continue, we are morally bereft and bankrupt.”
Faith McDonnell, director of religious liberty programs, Institution on Religion and Democracy.

Yes, because it is true.

“You have to call it genocide, because that’s exactly what it is. The US and the West missed the genocides that took place in Cambodia, Serbia, and Rwanda, and then felt very guilty about it. There is a sign outside Dachau that says “never again” in five different languages. … Officially acknowledging the genocide will honor the victims, open the doors to assistance for those who want to leave the region and those who want to stay, help Christians and other area minorities create a Nineveh Plains Protectorate area where they can be safe, and allow the international court to charge anyone who aids ISIS with war crimes. … If you don’t call it genocide, then I think you fail the whole process.”
Frank Wolf, former US Representative, Jerry and Susie Wilson Chair in Religious Freedom at Baylor University

Yes, to take a stand against evil.

“Naming the evil perpetrated not only provides hope to the persecuted, it presents a call to wise action. There must be a strategy to serve the suffering, anchored in a concrete but flexible plan that addresses root causes, geopolitical and spiritual. … Geo-Christians, however, must pray and act carefully and comprehensively, but boldly. To do so, like Paul, they take seriously the stewardship of their national, global and kingdom citizenships (with their respective forms of God-given power). They remember the imperative of Psalm 82:3–4: ‘Defend the weak and the fatherless; uphold the cause of the poor and the oppressed. Rescue the weak and the needy; deliver them from the hand of the wicked.’ And, most of all, they remember the testimonial power that comes with suffering. … For the ‘geo-Christian’ living in the West, the designation of genocide against ISIS for seeking to destroy “in whole or in part” the Christians and other religious and ethnic groups is a threefold opportunity to 1) stand decisively against evil; 2) walk practically with all those who bear the image of God; and 3) suffer humbly with the Body of Christ. It is the right thing to do. It is in our self-interest. And it is the greatest opportunity in our lifetimes to defeat fear with faith.” Chris Seiple, president emeritus, Institute for Global Engagement.