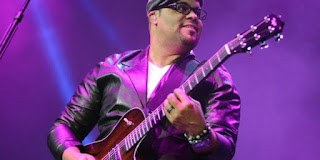 Following his suspension as worship leader at Joel Osteen’s Lakewood Church in February, He has subsequently been placed on indefinite leave.The leadership of the church made the decision to fully suspend Israel Houghton after he got divorced and began dating Adrienne Bailon who also happens to be Rob Kardashians Ex.

After 20 years of marriage, Houghton ended his Marriage with Maleasa. He and his new girlfriend Adrienne Bailon recently made their relationship public. They also went on a trip to Tulum, Mexico. Houghton said that Bailon did not play a role in his divorce. In his words:

“In the midst of all that’s going on in the world… Suffering, terrorism, deciding a future for our country, and making the world safer; It is sad that I am even having to address this matter,” he wrote on Facebook.

While He claims Bailon did not play a role in his divorce he however admitted he had known her for about two (2) years.
International News