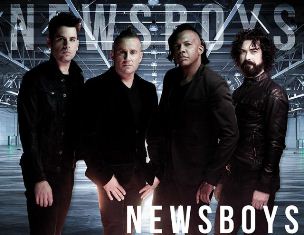 In the midst of racial tensions that have erupted into battles fought across the nation, Newsboys are starting a movement with their new album, Love Riot. Duncan Phillips, Jody Davis, Jeff Frankenstein and Michael Tait are tired of witnessing dissension in the world and wanted to use their platform to do something about it. "I think we've seen enough rioting over hate, about hate or because of hate. As a band, I think we're over it," Phillips told The Christian Post. "I know we've had some race riots.. Black Lives matter, which they do. But then if I look at my Bible, every life matters."

With that in mind the Christian rock band chose to place an emphasis on God's love with their 18th studio album. "I think what we want to say with this record is instead of all the hate we've seen, instead of all the wackiness we've seen...let's have a love riot. Our faith is a faith of love," the band's boisterous drummer Phillips said. "It's the ultimate love that our creator, our maker, our savior came down from the right hand of the Father out of love. Truly out of love, for no other reason and made that bridge between us and our father God."

For over two decades, Newsboys have been a well-known musical force in Christian music. While their message has always been about worshipping God, the band is trying to inspire the masses to love one another. Frontman Michael Tait said the band's message of love is nothing new, but this time they wanted to take that love to the next level with their new music. "When I speak from stage, I often talk about love," Tait said. "Darkness has been so prevalent in our culture. Let's have a love riot — it's time."

For two years, the group has been hard at work crafting the sound that would inspire people to incite a riot. The band knew if they wanted to inspire people in a different way, they had to do something different. Instead of recording the album in Nashville, Tennessee, where the Christian music industry thrives, Newsboys took a trip to Los Angeles, California. There, they teamed up with Mark Needham, who produced their album after working with the likes of Imagine Dragons and The Killers.

The result is an evolved sound with the power to elevate the band's ministry. "I think what we did by working with (Needham), he ended up pulling something out of the band that we wouldn't have gotten if we were in Nashville. So I'm very very proud of the record," Phillips said. "If you like our 'Restart' record, you'll love this one. It's better songs, better performances and also better production."
Two years after the release of their record Hallelujah for the Cross, Newsboys have learned to reinvent themselves with Love Riot. However, Phillips admits raising the bar after over two decades is anything but easy to do.

"Every record that you do, you're kind of reapplying to your job. People's tastes are continually changing," he said. "If you keep making the same records, it's like you're going backwards. You can't go too far that people go 'what just happened to my band,' but you've got to keep progressing, growing and expanding yourself so that you remain relevant." Newsboys have done just that with Love Riot, which features high-energy cuts like "Crazy," worship songs like "Hero" that could be sung in churches around the world and a title track with the power to inspire the world. Aside from being featured on Love Riot, the song "Guilty" also doubles as a single promoting the upcoming film "God's Not Dead 2" ahead of an April 1 release.

In spreading the message of loving people past their differences, the band realizes that doing so is anything but easy. "Loving is hard sometimes. It's dirty and inconvenient," Phillips admitted. "I think what we're trying to do with this record is say, 'hey we're all Americans, we're all people of this world. God loves everyone that he created and made.'" The band is currently spreading that message while performing songs from Love Riot as headliners on the multi-artist 2016 Rock & Worship Roadshow, which will end March 20. After that, they will pick up where they left off to conclude the final leg of the "We Believe…God's Not Dead" Tour which begins March 31.

The Grammy-nominated Newsboys are on the road about 230 days of the year, which would prove to be taxing for any musician. But after over 20 years of doing so, Phillips is still excited to perform around the world. He believes that God graced the group of four with a special brand to help change the world. "I really believe that everyone is going to know the name Newsboys before we're done. I don't say that in a prideful [or] arrogant way, but I just feel that's what God has placed in our hearts," Phillips told CP. "Sometimes it takes the branding of Billy Graham or whoever it might be. It does take these brandings that have been around for a while sometimes to legitimately have the world stage."

While the world may see the group of men as just a band, Phillips insists they have a higher calling.
"I think God for whatever reason has had his hand literally on this band. The great thing about Newsboys is that it's never been about one guy...the lead singer, the lead drummer or whatever," he said. "It's always been about something greater than the sum of its parts. We just want to play our part to make His name great."