Movie – The Letters: The Epic Life Story of Mother Teresa

- March 17, 2016
Film Description:
The Letters – Nobel Peace Prize recipient, Mother Teresa brought worldwide attention to human suffering around the globe through her service to the “poorest of the poor” on the streets of Calcutta, India. Embark on a journey to discover her path, as told for the first time through her personal letters. 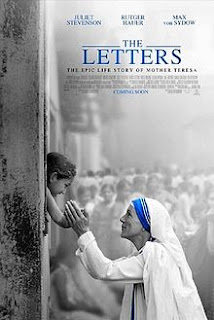 Plot
Mother Teresa (Juliet Stevenson), recipient of the Nobel Peace Prize, is considered one of the greatest humanitarians of modern times. Her selfless commitment changed hearts, lives and inspired millions throughout the world. The film is told through personal letters she wrote over the last forty years of her life and reveal a troubled and vulnerable woman who grew to feel an isolation and an abandonment by God. The story is told from the point of view of a Vatican priest (Max von Sydow) charged with the task of investigating acts and events following her death. He recounts her life’s work, her political oppression, her religious zeal, and her unbreakable spirit. 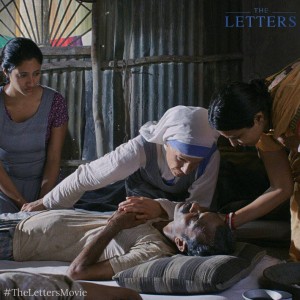 Development
Riead began exploring ideas for an inspirational and uplifting film just before the devastating terror attacks of September 11, 2001, forced a realization on him that would come to define his project. “I didn’t know there was that kind of evil in this world until then,” says Riead. “The attacks really brought that home.”

The Letters became a labor of love for Riead during the fourteen years it would take to produce the film. The turning point for Riead was the discovery of a startling cache of heartfelt, formerly confidential letters written by Mother Teresa to her spiritual advisor, the Belgian Jesuit priest Celeste van Exem, over a nearly 50-year correspondence. In her letters, some of which have been published in the 2007 book Mother Teresa: Come Be My Light, Teresa revealed a crisis of faith that left her doubting God’s belief in her dedication to the poor. Riead read all of the letters that were available to the public and decided that they would make up the spine of his screenplay.

Casting
When the time came to cast the film, Riead had a wealth of actresses clamoring to don Mother Teresa’s habit. To play her confessor, Father van Exem, Riead cast Max von Sydow, the Swedish star who has been a favorite of directors ranging from Ingmar Bergman to Martin Scorsese. When von Sydow asked the director for some insight into the character, Riead gave him a simple but telling answer. “I said, the whole world looked up to Mother Teresa,” he recalls. “And Mother Teresa looked up to Father van Exem. He just looked at me for a long moment, and he said, ‘got it.’ And that was it. He showed up and knew exactly what to do.”

To portray the nuns and students of the Loreto Convent, the Bishop of Calcutta, Mother Teresa’s wealthy benefactors, and the residents of the poverty stricken slums, Riead cast professional actors from India’s Bollywood film industry, considered the largest in the world.

Release
The Letters premiered at the Sedona Film Festival in February 2014. It was released theatrically in 886 venues on December 4, 2015.

Critical reception
The Letters has received generally negative reviews from critics. On Rotten Tomatoes, the film has a rating of 30%, based on 33 reviews, with an average rating of 4.4/10. The consensus states: “The Letters tries to honor Mother Teresa with an unstintingly positive portrayal of her life and works, but ends up smothering a fascinating real-life story under a bland hagiography. On Metacritic, the film has a score of 25 out of 100, based on 11 critics, indicating “generally unfavorable reviews”.

At the Sedona Film Festival, the film won the Audience Favorite “Best of the Fest” Award, and the International Catholic Film Festival in Rome, where Riead was honored as Best Director and Juliet Stevenson as Best Actress.

Through her words, we can aspire to be, as Mother Teresa said, “a pencil in God’s hand” – an instrument for good.