Tenn – Multiple award-winning artist Matthew West has just received his seventh No. 1 radio single with “Grace Wins.” The song, his second radio single from the 2015 release “Live Forever” (Capitol CMG), has hit the top of both the Billboard Christian Airplay chart and AC Indicator charts the same week. 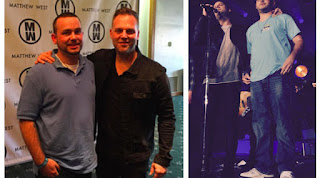 “I just heard the news that ‘Grace Wins’ is No. 1 this week and I’m blown away!” West exclaims. “I have to thank my friends at radio across the country for once again carrying a song from my heart straight to the ears and hearts of their listeners. I think of this song as a victory anthem, and I hope it’s message has reminded people that we don’t have to live life weighed down by the defeat of mistakes we’ve made. Nobody’s perfect but we are proof, living proof that grace wins every time.”

Matthew West was inspired to write “Grace Wins” when he heard Robert Muir’s story. In 2014, Robert attended a Matthew West concert with his mother and at that time, he was addicted to heroin and in desperate need of help. Deeply moved during the concert, Robert knew he needed to make a life change. Through Matthew West and his non-profit ministry popwe, Robert found out about Teen Challenge, a Christian-based drug and alcohol recovery program. Yet, Robert couldn’t afford the tuition for the 14-month recovery program so popwe funded the entire program for Robert. Today, he is on the road to recovery. He has a personal relationship with Christ and is even interning with Teen Challenge to help others.

Pictured above is Robert who joined Matthew West during the Norfolk, VA Winter Jam Tour stop this past weekend. Together they were able to share with the thousands in attendance about the true impact of someone’s life story and that indeed “Grace Wins” every time. To find out more, please visit popwe.org.

While continuing to co-headline Winter Jam, which wraps in Louisville, KY on April 3, West will then embark on The Bible Tour. The popular 19-city tour returns for its third year with an all-new lineup that includes West, Sidewalk Prophets, Aaron Shust, Love & The Outcome and Blanca.

The Bible Tour is a partnership between 25 Entertainment, K-LOVE Radio, Roma Downey, Mark Burnett and LightWorkers Media (The History Channel’s “The Bible” TV miniseries). It will feature the artists bringing the Bible to life through live performances of today’s biggest songs paired with stunning visuals in a one-of-a-kind multi-media experience.

ABOUT MATTHEW WEST: Matthew West is a four-time GRAMMY® nominee, a multiple-ASCAP Christian Music Songwriter/Artist of the Year winner and Dove Award winner and, and was awarded an American Music Award (2013) and a Billboard Music Award (2014). West was also nominated for a Primetime Emmy® Award for Original Music & Lyrics for “The Heart of Christmas” from the film of the same name. In addition to his own recording career, West has more than 100 songwriting credits to his name, including cuts by Rascal Flatts, Scotty McCreery, Casting Crowns, Michael W. Smith, Amy Grant, and Mandisa, among others. Selling more than 1.2 million albums to date (TEA), West’s discography includes acclaimed releases: Live Forever (2015), GRAMMY-nominated Into The Light (2012), The Story of Your Life (2010), Something to Say (2008), History (2005) and Happy (2003).

Matthew West, well known for communicating stories through song, has received more than 40,000 stories from around the world. His latest album, Live Forever, continues that storytelling theme and debuted at No. 1 on the Billboard Christian Sales Chart. West has obtained numerous No. 1 singles, achieving a record-setting No. 1 for 17 straight weeks at radio with “Hello, My Name Is” and “The Motions” for 15 weeks. On the road year-round, he has headlined many of his own tours, such as the Live Forever Tour that ran through Fall 2015. West is co-headlining 2016’s WinterJam Tour Spectacular, the No. 1 tour in the world, which he first joined in 2013. Matthew West can also add author to his name, writing four books to date: Give This Christmas Away, The Story Of Your Life, Forgiveness, and Today Is Day One.