“God is so good to us, I’m very thankful for this team and their amazing work!” shares David Pierce, Chief Creative Officer for K-LOVE & Air 1 Radio. “John Sanders has put his heart into the K-LOVE Fan Awards Weekend and it shows! Scott Moore and his team really did an amazing job! This recognition is both rewarding and humbling.”

“I am thankful for the vision and belief that K-LOVE has in creating an awards program like this,” explains Sanders. “As Chief Creative Officer David Pierce always seems to ‘get it’ when it comes to the next big thing. This EMMY® only validates that once again his assumptions were correct. Special thanks to him, Steve Strout, Scott Moore and the great teams they lead that make this event possible.” 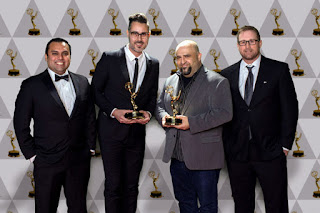 “This project was very much a team effort in accomplishing a very complicated production under a very tight timeline,” adds Scott Moore of Go Live Pro. “Lighting Designer Tony Fransen and Technical Director Matt Guice were largely responsible for the success of the event, and helped me in coordination. Many thanks to our friends at K-LOVE Radio and John Sander LLC.”

NATAS is a non-profit, professional organization dedicated to fostering excellence in television. The academy has 19 chapters with 15,000 members nationwide. The Nashville/Midsouth Region encompasses the States of North Carolina (except Asheville) and Tennessee, and northern Alabama.

About The K-LOVE Fan Awards:
The K-LOVE Fan Awards mission is to create a fan experience that celebrates and promotes artists, athletes, authors and entertainers who, with excellence, engage and impact popular culture for Jesus Christ. This year’s show will include co-hosts Elisabeth Hasselbeck and Matthew West. Coca-Cola Consolidated will be a presenting sponsor for the 2016 K-LOVE Fan Awards. CCBCC is the nation’s largest Coca-Cola bottler. Headquartered in Charlotte, N.C., Coca-Cola Consolidated makes, sells and distributes Coca-Cola products along with other unique beverages, carrying more than 250 brands and selling more than 178 million cases in 2015. Previous hosts for the K-LOVE Fan Awards include Phil & Kay Robertson and Jase & Missy Robertson from A&E TV’s popular show “Duck Dynasty,” Candace Cameron Bure and Kirk Cameron. For more information visit www.KLOVEFanAwards.com. The K-LOVE Fan Awards is an EMMY® winning John Sanders LLC/World Hope Event.

About K-LOVE:
K-LOVE plays positive, encouraging contemporary Christian music with a message designed to draw people toward an authentic relationship with God while living out real life in the real world. The radio network has 446 signals in 47 states with an estimated weekly audience of over 14 million. Now with their Fan Awards, their mission is to create a unique and fun fan experience that celebrates and promotes artists, athletes, authors and entertainers, who, with excellence, engage and impact popular culture for Jesus Christ.

Use of the trademarks and service marks of The National Academy of Television Arts and Sciences (“NATAS”), including the mark EMMY®, requires the prior express written permission of the National Television Academy.
Award News