--------HOST SPEAKING:---------
In 1992, a Korean American by the name of Choo Thomas, becomes a born again Christian. What makes this story unique is that two years after her conversion, Choo was visited by Jesus Christ of Nazareth. She was subsequently escorted to heaven several times and shown hell twice.
Choo Thomas has written a book about her experiences; the book is called “Heaven is so Real” and it was published on October 2003. 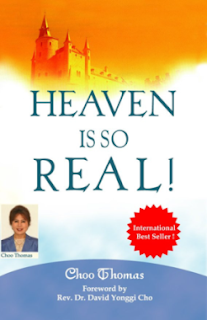 Within a year of being published, this book has become an international bestseller as well as a top ten Christian Charismatic book in the United States. How does a simple housewife, who speaks limited English, not only manage to publish a book, but within a year of being published, it becomes an international bestseller ? But perhaps an even more important question is why these
revelations now. “Heaven is so Real” and this is the story of Choo Thomas.

--------CHOO THOMAS SPEAKING:---------
“Well…
Heavenly Father, thank you for allowing me to testify. Halleluiah. I become Christian since in 1992 and I literally fell in love with Jesus after I went to church a few times and I wanted to give every area of my being to Him the rest of my life…So…

And I want to speak briefly about a book called “Heaven is so Real”. The Lord Jesus Himself took me to heaven seventeen times with my transformed body, like when I was 15 or 16 years old. Before this, He prepared everything step-by-step. 1994 He anointed me my entire body with Holy Fire, then a month later, He showed me with His visual presence at the church during worship service. Then 1995, Easter Sunday, He anointed me with shaking body and ever since, my body shakes at the church, during my prayer time. You see, my body is moving back and forth right now, if I don’t do this, my stomach get very tight and it feel like exploding; that’s why I’m moving back and forth. So please don’t think anything wrong with my body. That’s the Holy Spirit doing this because I’m talking about Jesus, that’s why.

And then, after this, He baptized me with Holy Spirit, with new tongues, Heavenly songs, Holy Laughter and I was so anointed for three hours and I was on the floor, I couldn’t get up because it was too powerful. After that, few months later, pastor Larry Randolf, he prophesized for me that he told me that the God wants to use me in such a special way. And all his prophecy was come true , thousand times, more. And after this, January, 1996 , Lord Jesus, He was visiting me with His visual presence.

And He visited me for 10 times to tell me how He going to use, and the all the things, His plans and He was telling me about it, as in the book. But He didn’t tell me He was going to take me to Heaven. So, after 10 times, February 19, 96, He began to take me to Heaven with my transformed body, like His Spirit body, my body. Each time, before He took me to Heaven, He brought me to the beach, earthly beach. The very first time before he took me Heaven, He took me to one side of the beach He showed me small body of water crystal clear then He showed me huge shiny tunnel. So after that he took me to heaven.

--------HOST SPEAKING:---------
“After going through the tunnel, Choo writes: “The Lord and I walked along the road that came down from the top of the hill. Eventually we reached a huge white gate that stood in front of a large white building. We walked through the gate and proceeded towards the white building. We entered and walked down a long corridor that led to a very large room. Which we entered . As I looked down, I realized for the first time that I was wearing a different robe than I had on at the beach, and I could
feel something heavy was resting on my head. I reached up and discovered a beautiful crown had been placed there without my realizing it.

Then I looked directly at the Lord. He was sitting on a throne, and He wore a radiant gown and golden crown. Others were there with me, kneeling on the floor and prostrating themselves before Him. The walls of the room were made of large shiny stones that glowed. The multicolored rocks provided an effect that made the room seem warm and happy, as well as mysterious. Then, just as quickly as I had been transported up the mountain and into the white building, I found myself on the beach again.

--------CHOO THOMAS SPEAKING:---------
Very first time He only showed me His throne room. Then after that we came down from heaven and the, we were sitting on the sand on earthly beach. And then He began to talk. He say, We just went to Kingdom of Heaven. The only one who will come there are obedient and pure hearted and He say preaching gospel is very important and He waited for awhile and He say those who don’t tithe, they are disobedient Christians. That was the last word He say the first trip.

--------HOST SPEAKING:---------
Choo went on to visit heaven 16 more times, in each of these visits, she writes: “In my transformed body, I walked with the Lord on the beach, and then He escorted me to heaven. We walked through the pearly gates and went to the white building to change our clothing. After changing, we walked across the golden bridge. It all was becoming so natural to me. Each believer, I’m sure, will go through the same procedure when he or she goes to heaven.

--------CHOO THOMAS SPEAKING:---------
After that, He took me to heaven 16 more times. Each time He took me there, He showed me different things. And when He showed me special things, always, he was saying that I prepared this for my children, I know what they like. Like when He showed me beach, you see daughter how beautiful this beach is, I know my children like this beach and when He took me to fishing, I know my children like fishing, that’s why I prepare so many things what they like and I realized in heaven is well a thousand times beautiful than on Earth, but a lot of things like on Earth like roads, buildings, trees, bushes, rocks, flowers, rough places outside the kingdom; there are so many things
there; but that they are thousand times beautiful on Earthly things, just beautiful.

The beauty of heaven is indescribable and I can’t even describe how beautiful they are, just beautiful. And the, I realize how much Jesus loves each and every one of us. The way He talked to me was saying that “you see how much I love my children and I did all these things for my children”, you know. That is why He took me there to show what He prepared for His children, so let each and everyone know what heaven is waiting for us, so before He comes, He want all the Christians to know this things, so they can be excited and go there. That is why I believe He showed me these
things. He doesn’t tell me everything, you know, thoroughly, He just show me some certain things, just say very few words, necessary words He tells me. That’s loving God He is. Praise you Lord.