Harvest America Deemed Largest 1-Day Evangelistic Event Ever in US; More than 25,000 Make Commitments to Christ 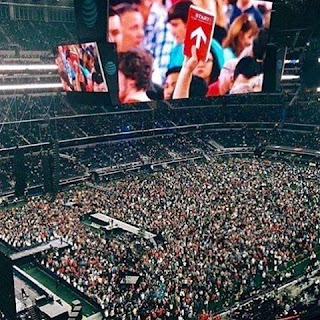 DALLAS, March 10, 2016 – Now that many of the 7,200 remote host locations participating in Harvest America have reported in, organizers are praising God for not just the record attendance figures, but the number of lives changed through the presentation of the Gospel message by evangelist Greg Laurie.

The trackable online audience was also impressive. Nearly 90,000 viewed the webcastat www.harvestamerica.com, with more than 1,000 of those indicating they also made a faith commitment. This brings the cumulative participation for Harvest America to over 350,000, and total faith commitments to Christ at more than 25,000.
“We only celebrate these statistics because they represent the personal lives changed by the transformative Gospel message,” Laurie said. “We pray that each and every one of these individuals gets connected with a local church and begins growing in their faith, sharing what has happened to them with others in their circles of influence. That is our prayer for the ultimate impact of this event, because that is how true revival begins.”

Crusade organizers are working now to ensure each of these “inquirers” receives follow-up. Volunteers from local churches in the DFW Metroplex, and at each of the remote host locations, are reaching out to those who made decisions to connect them with a church and to encourage them in Bible study, in prayer and in sharing their new found faith. Follow-up workers will be an ongoing resource to individuals who made a faith decision during Harvest America until each is actively involved with a church local to
Not trackable, but perhaps of even greater importance, is the number of individuals reached through the radio and television broadcasts of the event. More than 600 radio stations carried the audio while the full event was broadcast live on JUCE TV programming on Sky Angel channel 264 on Dish Network. It was also televised later that evening on Trinity Broadcasting Network’s international platform.

Harvest Crusades first began hosting large evangelistic events in Orange County, California, in 1990. Since then, including this most recent outreach, nearly 5.6 million individuals have attended, with more than 474,000 having made faith decisions. In addition, Harvest Crusades have been webcast online since 1997, and have seen 1.8 million individuals tune in via live stream.

Trinity Broadcasting Network (TBN), and a weekly television program greglaurie.tv is available online at www.harvest.org, and is carried on both TBN and the Church Channel, as well as on ROKU and the Harvest app.

Laurie serves as senior pastor of Harvest Christian Fellowship, with campuses in Riverside and Irvine, California, which oversees Harvest Ministries. The ministry exists for the sole purpose of presenting the life-changing message of Jesus Christ to as many people as possible, and to help believers mature in their faith. More information is available at www.harvest.org.

From the desk of AlexMurashko.com
Article US