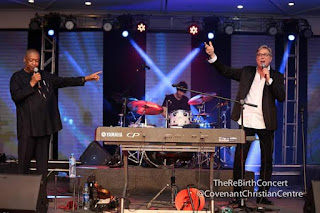 World renown gospel worship leaders Don Moen and Ron Kenoly will be live at THE REBIRTH concert at the Covenant Christian Centre HeadQuarters (Covenant Place) in Iganmu beside the National Theatre later tonight 25th of March, 2016 from 5pm.

According to the promotional video released by Pastor Poju Oyemade, in 1992 both men recorded some of their very popular hits in Norfolk, Virginia on the same day at the same arena. That same magic will be brought to life tonight.

Both ministers had previously visited the church individually but are coming together for the first time. This is a great way to kick off your Easter celebration. Be there!