- February 19, 2016
House One Music recording artist, OluwaShalom, is out with her first official single ''Eledumare'' from her debut album which is also titled ''Eledumare''.

OluwaShalom like her label mate, Naomi Mac is a powerful singer, songwriter, and also past contestant and finalist of a music reality TV show, Destiny Child Gospel Music Talent Hunt.

Olorunfemi Shalom hails from Kogi state Nigeria, works professionally as a vocal coach and also keeps busy when not doing music with her hobbies as a florist and fabric jeweler.

The song "Eledumare" which is already enjoying airplay on some of the top radio stations in Nigeria, was produced by Rotimi Keys, and mastered by Paul Cox (USA). The ''Eledumare'' album which is scheduled to be released in March this year, features collaborations from Naomi Mac, Onos Ariyo, Mike Abdul, Dr Lester Lewis (Jamaica) and Lolade, all creatively put together a fantastic musical experience in a 13 track master piece.

According to Femi "Bricks" Amida Chairman of House One Music and Executive producer of the album, ''Eledumare'' is a physical musical experience of a divine reality which we hope will make an impact in our generation and beyond. 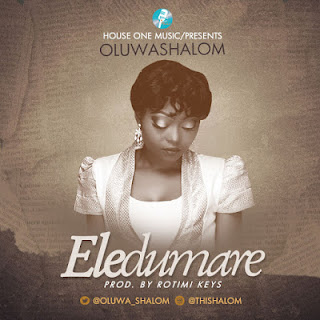