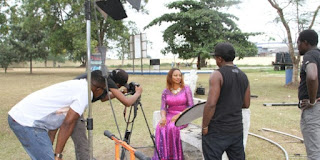 As worship leader extraordinaire and event planner gears towards the release of her new single #iWin and her upcoming concert on Easter Monday March 28th, she has let us in on what to expect in a recent interview.


The new single is an upbeat declaration of who we are in Christ. Laureche said that she is “particularly excited about this song because it’s more like declaration of who we are and our birthright in Christ. The world we live in now just seems to constantly spell gloom and doom so my expectation of this new release is that as many as play it and listen to it, the negative voices all around will be drowned as they join me to make those powerful declarations of who we are in Christ. Darkness cannot comprehend light so also no matter the situation we find ourselves in, we win! A happy dance able song that will just lift the saddest spirit once the beats start…haha!”

Also, the event planner and singer has announced that her concert “Miracle Worship Concert” will hold in Port Harcourt on Easter Monday, in March. She said the concert will be an avenue to connect with the divine and receive from Him through worship. She promised to unveil more details about the concert soon.
“The upcoming concert is a worship miracle concert. Theme is #when God visits. It’s a time of worship and miracles. Really when God visits, expect a divine intervention in your affairs. We will use music and worship to get the attention of heaven and when we do, it ushers us into a new and higher level of our lives. We are saying… come and lay whatever troubles you have struggled with at the feet of Jesus and simply worship. We have the assurance that God will visit us in an unusual way. Date is 28th of March 2016, time is 5pm and venue is Oasis Center. 12A, Psychiatric Road, Port Harcourt. You can call 08097100692 and 08185602787.” Laureche said.

Born into a family of 8 children, she spent most of her early years in Port Harcourt but had to move to Anambra for her tertiary education and later, Benin for her youth corp. Her event company was formally launched in 2004 after working with an oil servicing company for 6 years. The company is the brain behind the successful Easter event “Excuse me Laugh” in its 9th year.

1st of December 2014, Laureche launched her debut album “More than Enough” that has produced singles and videos such as “You Reign”. “Izurukeme” and her forthcoming “I Win”.  She has sang on different stages with other Gospel artistes such as Sinach,  Eben, Buchi, Frank Edwards, Joe Praise, Chris Shalom and Samsong.http://Listen To Snippet Of Laureche’s Forthcoming Single “I Win”
News