- February 24, 2016
'I will resign the moment I see that I am not adding any value to your company and yet still be getting salary and benefits', I said. 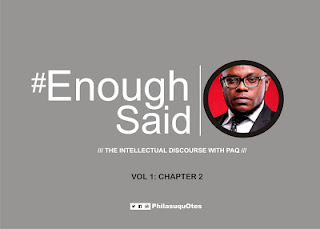 I remember telling this to the CEO and managing director of a company who got me employed in their firm after I consulted for them for just a few weeks.

They actually sacked a friend of mine to replace him with me. It was a sad moment for me and that friend but I understood that the company needed results and results were what they would get. I was ready to give results. I didn't care what my position in the company was. Just like in other places I had been employed, I came in as a consultant but the management decided to give me a position in the company and within few weeks, they offered me a partnership in the company.


This was not because I warmed the chair in the office so well. It was because of results they saw and the ones they saw coming. When I work, I put in all I have into it. Most times when some other staff slack, I fill in and get the job done there.


Why? Because I understand that efforts put in determine the result. Once we have a target and find out that there is a weak link in our chain, something needs to be done to strengthen that weak point. If it requires me folding up my sleeves and jumping into work in that direction, I do so.

But really, what is happening to our work force today? Why are people so lackadaisical about their work? Why do people get employed only to enjoy the benefits of the job while their work in the job suffers? Yet, there is an amplified cry over the rate of unemployment in our African countries. How ready for employment are our youths? How competent will they be on the job? Should the debate really be about 'Unemployment' or 'Unemployability?'


I remember a friend of mine putting up a notice calling for the services of a sales girl in one of her fashion shops. I was privileged (or was it mis-privileged?) to be around when two girls walked past her shop and came back right in to ask for the position.


Now, I had to give them space for the interview to be carried out but after it all, I spoke with my friend and she told me the girl that answered the questions asked for the salary and then told her she would have to employ her and her friend. Obviously, she can't be employed while her friend is unemployed or is it that she needs her friend's company while working?

Is that supposed to be to the additional cost of her employer? Having your friend to gist with while working and having your employer pay you both? This is sad. Really sad.

Obviously, the young girl is not aware that she will have to start and build her career at a point in her life without the apron strings of her parents or cordial cords of her friends. We need to take work seriously. This lackadaisical attitude to work really needs to stop.

I was speaking with a team mate of mine recently and pointed out that if we each don’t work on the tasks put before us in our positions on a team or project that it would affect the overall project. A thing stops working when we stop putting work into it. A company fails to work when it’s workers don’t work.

A nation doesn’t work when its workforce are not working either as a result of unavailability of work opportunities or their unemployability. The issue of unemployment has been on the front burner in Africa. Recently, the EFCC was made to probe the 2014 Immigration employment racket that led to the loss of the lives of several Nigerian youths in Abuja.

I took a look at the pictures of the youths at the stadium and what I saw made me cringe with a tinge of gloom. The crowd that came out to get recruited into the Immigration was more than a football crowd. The stadium was filled to the brim with young Nigerians who were assumed to
be unemployed all clamoring for the few advertised vacant positions.

Now, amongst those in the crowd, how many of them were really unemployed? Were they seeker another means to make money from a government parastatal? We all know how most civil servants seemingly ‘laze’ through the months while awaiting their month-end salaries. This has been repeatedly decried yet still seems to hold sway.

We’ll get back to this but let’s look at how many of those youths were actually ‘employable’. You see, the problem of the ‘unemployability’ of our youths is as much a bane as the ‘unemployment’ we complain about.

Many youths today are not just unemployed but are actually unemployable. You see, Robert Kawasaki once said that when you are young you should work to learn more than you work to earn. That doesn’t seem to be an ideology our youths thumb print to these days.

Many youths you see today that want to work are actually concerned about how much they will get paid even before knowing what the job entails. Many more would do just about anything as long as it puts some money in the pocket or bank account. Yet still, many haven’t realized that they should put in work in a field that relates to the one they will end up in. What’s even more sad is that a lot more get to put tags on themselves even without being qualified for what the tag says they do. We have a lot of ‘Consultants’, ‘Life Coaches’, ‘Journalist’, etc that don’t even know how to offer their services to themselves talk less of offering such to other people. Indeed, you should learn before you earn.

You should learn under someone that is already in the field you want to go into. You can also research and enroll for some trainings that would help up your ante on that career you see as a choice. The work you put in while young should get to pay off when you eventually start practicing your profession. So, you need to ensure that wherever it is you seek for a job or some short-term engagement should be somewhere that will add up someday to what you want to do or become in the long run. Don’t do it just for the money. Do it to learn first.

Now, let’s go back to our nation. Our civil service is really a cause for concern. It has become more of a social cause than our nation’s work force. Civil servants are supposed to render services in the parastatals they serve in but we have more of them who are there just to while away time, do some routine and ‘ancient history’ work and collect salary when it is made available. Even the ones that join the civil service with gusto eventually seem to get sucked into the rigmarole.

It is like a gorging cyst of ineptitude, routine of incompetence and ofcourse laziness. Yes, there are civil servants who are proactive and whose input can stir a change in the system but the system itself needs more than a stir. It needs a heavy shake and a revival.

Many gifted and competent persons end up working in the private sector or starting up their own companies but it sure is necessary for us to have a civil service that is competent and innovative.

Imagine if the likes of Dangote, Fela Durotoye, Steve Harris, Leke Alder, Tara Durotoye, etc were civil servants or heads of parastatals and were all given the free will to innovate and move that sector to the optimum it can become?

Well, those mentioned names have made their marks in life and in the nation. We will not wait for a Dangote or a Tara Durotoye to make that move. It can be made by me and you. Let’s take work serious and make whatever it is we put our hands to work, even as we put the nation to work.


Philip Asuquotes is one of the strategic minds that have been concerned about the growth of Africa through her youths. He is a strategy consultant and a seasoned mediapreneur.