- February 23, 2016
Tehila crew member and gospel music sensation, Nkiruka Ogboruche, popularly known as Enkay, hit the limelight after releasing –Yes! You are the Lord – her first single in 2014. Now, the soulful urban contemporary singer is set to follow up that acclaimed release with her first-ever full-length album, TheKingdom Anthem.Her first single, Yes! Youare the Lord, is an upbeat worship song in which Enkaytakes her listenerson an awe inspiring journey into the presence of the almighty. 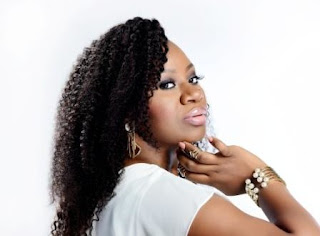 As with much of her music as part of the Tehila crew, the debut album is an eclectic mix of urban contemporary sound with the fusion of alternative rock with an Afro twist, R&B, hip hop, pop, and soul, meeting the deep spiritual needs of the diverse and vast audience cultivated during her past tours of Nigeria, Europe and the Americas.

A 10 track album, The Kingdom Anthem, is a fusion of different genres of music showing different expressions of Enkay as she was led and inspired to record. The album features fast paced upbeat energetic numbers Yes! You are the Lord, The Kingdom Anthem andO Sing featuring Sammie Okposo andTim Tehila, as well as mid-tempo sonorous numbers such as I Need YoufeaturingOnosAriyo and NikkiLaoye, and Bless my Home’sAfrocentric feel.


Commenting on the album, Tim Ogboruche of Tehila Crewwho is also CEO of Tehila Records said,


“The focus of The Kingdom Anthem is to praise and worship God, expressing our love and awe of who He is. When we fail to worship God we always find a substitute, even if it ends up being ourselves.Songs in the album were put together toinspire listeners to constantly praise and worship God, and not to lose sight of the kingdom of heaven no matter the circumstance of life, its twists and turns.” On her part, Enkay, who is still the part of the award winning gospel group –Tehila Crew, said“The Kingdom Anthemis an expression of my commitment to praise, exalt, honour, glorify and please God for the opportunity to minister to millions all over the world under an atmosphere of anointing, healing and breakthroughs.”

This year, Enkay is set to release videos for some songs from the album such as Yes! You are the Lord, O Sing, andYou are Amazing, among others. She will also be hosting some concerts with the aim of leading people to the presence of God in an atmosphere for miracles. Enkay will also unveil a number of other impactful projects from the second quarter of the year.

Seasoned producers that include Phat- E, Wilson Joel, Chris Jones and El-Jamin worked tirelessly to birth the album which was mastered by HuskyLim in Houston Texas. The Kingdom Anthemalbum is presently available atLaterna Ventures, Bible Wonderland, and City of David bookstore, among others. It can also be found on all online platforms such as ITunes, Spotify, Amazon,Deezer etc. 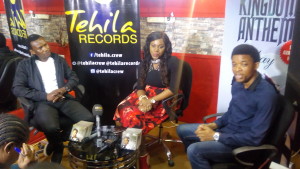 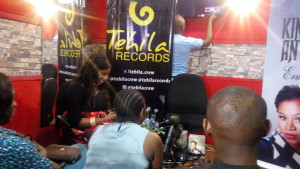 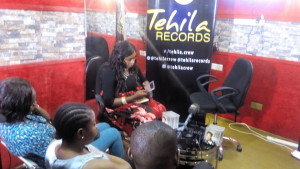 About Enkay
Born in Kaduna to Dr. and Mrs ChidoziriOnuabuobi as the first of five children, Enkay grew up in a house filled with music; hergrandmother, mum and siblings are music minsters transcending different generations. She recalls recording her first tape with her dad and siblings huddled around a cassette radio with a bottle and spoon as musical instruments. She further honed her skills in music and ministry at Abia state University where she was one of the lead vocalists at the school’s biggest and best choirs.

Enkay, who is happily married to the most amazing man on earth, Tim Ogboruche, is blessed with three boisterous boys. She works for one of the most admired multinationalcorporation in Nigeria.

Over the years, the ALABANZA concert has played host to a vast collection of seasoned and anointed gospel artistes both in Nigeria and across the world.The third season of ALABANZA which held9thSeptember2015 was headlined by American Grammy Award-Nominee and multiple stellar awards winning Gospel singer, Kierra Sheard.
Bio News