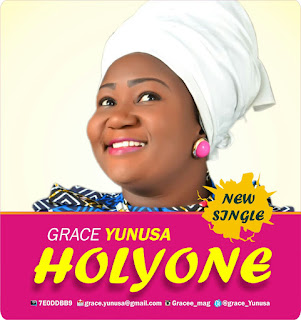 Grace Yunusa, a talented songstress debut in a new single titled “Holy One”, an amazing piece put together by her and produced by a veteran producer Godswill T. Joe, (popularly known as GWills) will surely set the mood for worship and anticipation of a move of God’s Spirit as she extols his Holiness. She teams up with Kelechi Godswill to deliver this amazing piece.

The audio is released in preparation of her forth coming video Album.

Grace Yunusa, a gospel Singer/Songwriter was born and bred in Bauchi State, and is graduate of Political Science from Gombe State University, but her love and passion for music is unending and can’t be denied. She began doing music at an early age of 8 as a member of the FCS Choir and later became the leader even in her Junior School days. She ventured into music professionally in 2009 and has released a debut Album titled “It’s Over” in 2010.
Bio Download