- February 26, 2016
A Christian college student claims she was fired from her position as an editor-in-chief of the college newspaper for giving street preachers on campus food and drink. Nicole DeCriscio, a student at DePauw University in Indiana was laid-off from her leadership position after befriending the street pastors, who were with The Campus Ministry USA. 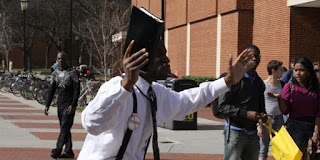 In accordance with The Christian Post, the street preachers caused student protests for their signs that read “you deserve hell,” and their confrontation preaching methods. The DePauw University newspaper reported about them several times before they eventually left the campus.
DeCriscio wrote an opinion article for The Odyssey Online  giving reasons why she gave sandwiches and drinks to the street preachers, including their leader Jed Smock.


“I’m a Christian, and as such, I believe that God calls me and other Christians to universally show the love of Christ to others,” she wrote. “You don’t just turn this outpouring of love on or off depending on who it’s directed toward. It’s not a light switch. Doing so is the very opposite of showing Christ’s love because He showed love through corporal works of mercy to everyone, from the sinners to the pharisees and every possible person in between.”
DeCriscio told the Society of Professional Journalists (SPJ) that she believes she was fired because she offered a different perspective on the street preachers.
Newspaper advisor Meg Kissinger disagrees, claiming that DeCriscio violated the newspaper’s code of ethics.

[The DePauw] knew this was an important story to get right and report on impressively, to ask tough questions from the police, the administration, the evangelists and http://Christian College Student Fired from College Newspaper for Giving Street Preachers Food and Drinkthe students. It became very clear, very soon that Nicole wasn’t up to the task of gathering the diversity of opinions,” Kissinger told the SPJ.