How To Have A Successful Courtship Part 02

How To Have A Successful Courtship Part 02

Courtship does not have a particular duration of time; neither is there a scriptural reference that says exactly how long courtship should be. Most Bible examples vary from couple to couple like Isaac and Rebecca, Jacob and Rachel, Jacob and Leah in Genesis 24, 29:1-30. However, the Word of God in Ecclesiastes 10:10 says: Wisdom is profitable to direct. Since marriage is a lifetime affair and not a thing to be rushed into, it is important for you to be sure that you know each other well enough. Even though courtship is not judged by how long but how well, the period should be reasonably long enough for both of you to know each other well enough, for you to be able to live together all the days of your lives. 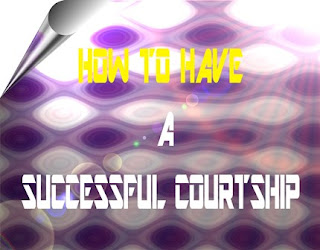 My husband and I courted for six years and its effect is speaking now, as it gave me ample time to know all about what my husband was doing and what to expect in the future. You cannot know someone completely, no matter how long you court but the longer, the better. If you court for only a week or less, then, you will need God’s special grace in your marriage. Why? Because, knowing each other will last almost a lifetime, while learning about each other will also take time, but you are better off, when you know quite a lot about someone. A reasonable length of courtship period is a necessity you cannot afford to overlook. In Genesis 29:20-30, Jacob courted Rachel for seven years but was given Leah. Even after that, he still had to court again for another seven years for Rachel! In fact, it was seven years and seven days with Leah’s week inclusive (Genesis 29:28).

Do not rush into marriage. Spend some time to look before you leap. Many have rushed into marriage, only to discover the true identity of the person they are living with, at a time that is too late. A lady once came to me to inform me of her marriage intentions. I wanted to ask her a few questions to find out some things from her. So, I booked an appointment with her. It happened that the appointment could not hold, and the next time I met her, she was already married. The look on her face showed that she needed help. I later discovered that the man she married had been living outside the country for many years and had just returned, so they did not really know each other. She, of course was in a hurry to get married, so she could travel back with him.
While there is nothing wrong with a woman wanting to travel with her husband after marriage, there is everything wrong in wanting to marry a man just because you want to go outside the country with him. The man, I guess, knowing himself and his spiritual limitations tried to delay the marriage, but she succeeded in convincing him since she was ready to shoulder all the expenses. As soon as the marriage was conducted, she discovered the real nature of the man she had married. He was a man, who was not just interested in the things of God. She wanted to call it quits, but God would not permit it.

If only she had been patient enough, she would have known the true colour of the man before rushing into marriage. Now, she had to live the rest of her life in an uncomfortable situation. It can be very dangerous not to know the one you are going to spend your life with, especially, in a world so advanced in technology that people get married everyday via computer/internet. Therefore, it is wise to ensure you know yourselves well enough, before going into marriage.

The benefits of knowing your partner long enough are innumerable. Some of the benefits both of you stand to gain include: all-round maturity spiritually, emotionally, physically etc. This is because of the increased level of understanding of each other that both of you will have from knowing each other for long. You will enjoy the benefit of knowing the peculiar characteristics, likes, dislikes, other various weaknesses of each other and know how to handle them (Genesis 5:22-23). You will be able to conclude better, on decisions such as the location, finances, number of children, vision and other plans that are important foundation for your future home.

Since courtship is not marriage, it can be broken. If while courting, you find out that your relationship is not going on well, or that both of you disagree more often than you agree, then wisdom demands that you break the relationship. If during courtship you discover that two of you cannot “walk” together, that is, you are not compatible and cannot make it together, a U-turn is permitted (Amos 3:3). Put an end to the courtship. If you feel you have made a wrong choice, call the relationship off! A broken courtship is permitted, if necessary. It is better to break a courtship than to end a marriage in divorce. After all, a broken courtship is not the same as divorce!

Some young men and women are in such a hurry to tie the nuptial knot that they do not take time to know each other or refuse to be true to each other. The courtship period is a time to prove all things about your mate. It’s true that you have decided to spend the rest of your lives together, but you must not take things for granted either.

“Dear Lord Jesus Christ, I come to You today. I am a sinner. Forgive me of my sins and cleanse me with Your Blood. Deliver me from sin and satan to serve the living God. I accept You as my Lord and Saviour. Make me a child of God today. Thank You for accepting me into Your Kingdom.”