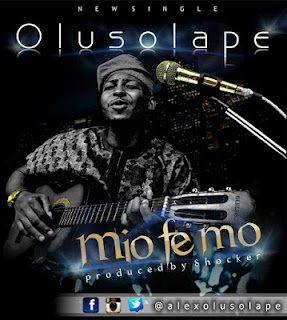 Olusolape (Real names - Alexandrai Olusolape Abayomi Ishiekwene) is an inspirational/Gospel artiste, music director, poet and a chef. Formerly known as I. Alex, has previously released two singles “I Have a Dream" and "Iseoluwa” in the year 2011.

Starting from the choir, Olusolape began his musical career having gone through training in the rudiments of music. He worked as a music tutor in several schools before he decided to go into studio recording.

Olusolape is here with a soul-lifting song of prayer titled “Mio Fe Mo”, produced by Shocker. This song is captivating and deep. It connects you with God, saying NO to every unwanted situations in your life.