London based Gospel rapper and songwriter – Sam 'O' Dayour soared to the top of the London and United Kingdom Reverbnation gospel charts on the 19th October, 2015; 9 days before his latest song release, ARISE N SHINE.

Sam whose music career started in the early 1990's in Lagos-Nigeria, zoomed past seasoned award winning artistes like Ghanaian Diana Hamilton [No 2], Daniel Akakpo [No 3], Amazing Ijeoma [No 4], and Aaron T Aaron [No 6] amongst others on the London Reverbnation Christian / Gospel charts. Sam 'O' Dayour also currently sits as Number 1 on the United Kingdom Reverbnation Christian / Gospel charts.

His new single, 'ARISE N SHINE' drops on the 27th of October, 2015 and the music video [Directed by himself and Femi Faloye] would be released on the 17th of December, 2015.Sam also recently signed a PR deal with the multi award winning London based Branding outfit, 'TOSH Mag PR'.
ARISE N SHINE was written and composed by Sam 'O' Dayour, and the song is aimed at sons and daughters of the Most High God who are so relaxed in their comfort zones. Sam believes that children of God are supposed to be the best in every field they engage in, and 'eat the real delicacies, not the throwaways in the bin'. Hence the song titled, 'ARISE AND SHINE'.

After releasing 2 Hip-hop albums, Sam 'O' Dayour moved to the United Kingdom a decade ago, and found the true love of Jesus Christthrough a divine intervention. He was then convinced to go into full time Gospel Music. Sam previously released Hip-hop hit songs,'BENDLOW', 'THIS IS MY STORY – ft Ennyhollar', 'PEACE SONG', and 'YES I DO'. He has ministered with the help of the power of Holy Spirit in more than 10 cities in the United Kingdom. 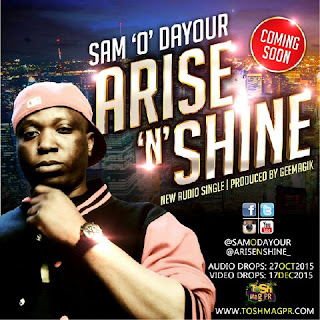