After TDZeal released his last single titled "Papa", it has touched so many hearts, gone viral and global. "Papa" is an emotional worship song that speaks of deep thanksgiving and heart of giving all to God for who He is despite all you pass through in life. All praises belongs to God because He never fails.

TDZeal is an established Gospel music minister in praise and worship. The song writer has performed the PromoteGospel Session of the song and now here's the official video. Cameo appearances by Uchey, ToeYourSea and Dabo Williams. 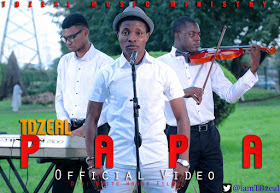 Love in the World (Devil herself) is a stain that can be wipe away 2ru the Word of God! Locate a Kingdom program now and be taught d full Gospel! and Repent of All your Sinful and Old ways of Live!!!
Download Video