Timi Phoenix is a minister of Gospel music from the prominent BLW Nation Inc alias Christ Embassy. Popularly re-conned with the crooner "Eledumare Boss", his first hit single that stormed the airwaves early 2014,. This was followed by the release of his album ''Magnifed" midway into that same year and subsequent releases of other singles off his new project which is yet to be titled. The singles include: "Shout Halle" and a Christmas song "Merry Christmas" all in 2014. 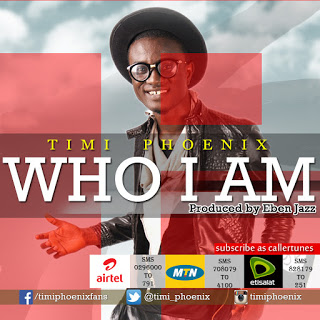 His consistency in putting out soul lifting and spirit edifying music has been remarkable. This time he has spiced up his tune to give another dynamic sound to the Gospel Music with "Who I Am", a dynamic and loaded song. As he will say "It's more than the melody and rhyme. It's the supernatural Word of God Coded in sound called the SoundCode." Ref. Pastor Chris Oyakhilome Phd."

The song reminds every believer that who we are is the Greater that is in us and we should walk and work in this faith guided mindset because we know exactly who we are!

Make "Who I Am" your callertune: