Fresh from the very first concert off their Grateful Worship Tour, The Swithins - Gospel singing quartet (sisters of same parents) releases "Miracle". "Miracle" was inspired by the health challenge of one the group member's daughter. It's a high praise that's guaranteed to cause a stirring. Produced by award winning Pastor Nnamdy (King Buskie) Echezona and recorded at Rockword Studios. It was mastered at eTracks Studios by Victor Okon. "Miracle" becomes the third officially released single from their upcoming Grateful album after 'Oyage' and the award winning 'Maka Ihe Nile'. 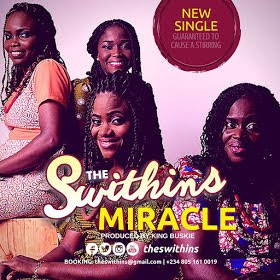 Plans have also been concluded to shoot the video this October. Award winning director – Akin Alabi will be behind camera on locations across Port Harcourt. The Swithins infuses sisterhood, faith, culture, love for God and music into their craft. Earlier this year, they received their 'Best Music Group Award' from TopNaija Music in Lagos – a blog dedicated to promoting quality Nigerian Music online. Already they are enjoying massive airplay across radio and TV in Nigeria as well as a popularity surge on social media. Maka Ihe Nile video (released October 1, 2013,) is available for viewing on YouTube.


The group started in 1998 as an A-capella group with the sole aim of sharing the good news of the Gospel of Jesus Christ through music. Staying true to their original vision, their unique selling points continue to include their consistency, dynamism and love for God.
This single just like the others incorporate everything they stand for – taking the Gospel of love, mercy, deliverance and encouragement to the ends of the earth through songs. It is also a testament to their continuing story of God's love and care. The local flavour is apparent in their choice of language and style. These include Igbo (where the sisters are from), and Ibibio/Annang (a dialect of the people of Akwa Ibom State in Nigeria's Niger Delta. They grew up and continue to reside in Port Harcourt, Rivers State.
With "Miracle", they hope to finally cement their presence in Nigeria /Africa's music scene.