Singer, song writer and renowned guitarist, Adeh serves up a very good tune titled "Most High" . He describes the new single as: "A song of worship with African rhythmic patterns."


Adeh is an Afro Jazz contemporary guitarist, hails from Oyo state, was born and raised in Lagos. He started his career professionally at LASU where he went to study marketing at the Lagos state university Ojo and obtained a bachelor degree in marketing.

However music found its way to his heart during the time he was in school. He had played music professionally backing up as a guitarist for seasoned artistes including Lara George, Mr Raw, Eric Arubayi and Temitayo George of West African Idol, Ice Prince, Jesse Jags, Tiwa Savage, Kenny K'ore and Segun Obe amongst others. 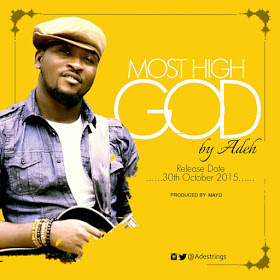 He has performed in places like Naijazz Festival, Tribute to Mandela held at Freedom Park, Centenary Beauty Pageant which was held in Bayelsa, Bayelsa International Jazz Festival where he performed with the likes of Hugh Masekela, Bright Gain, Agboola Sadare, Ego etc. He has also perform on the same stage with the high life genius Dr Victor Olaiya.