Directed by Rock Jacobs - "Wanna Be Happy?" is one of the first singles on Kirk Franklin's upcoming 11th studio album "Losing My Religion" out on November 13th, 2015. It is his first album in four years.

This is the first single to be given the visual treatment. A song expressing the need to take a stand and fight for your happiness all by yourself with the help of God, of course.

Kirk Franklin takes on major vices - Alcoholism, Armed Robbery and Domestic Violence in his new video. With an intertwined story-line of a woman who is struggling with alcoholism and drug use as it unravels at work; a man's panic to provide for his baby on the way leads him to rob a bank; and a police officer strikes his wife in the face in public. 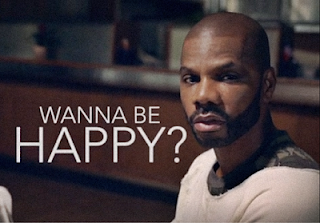 Check out official video below:


Love in the World (Devil herself) is a stain that can be wipe away 2ru the Word of God! Locate a Kingdom program now and be taught d full Gospel! and Repent of All your Sinful and Old ways of Live!!!
Amazon Kirk Franklin Video