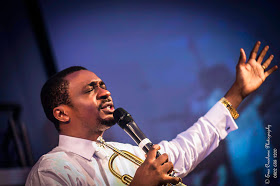 Extraordinary worshiper, songwriter & coach, Nathaniel Bassey shares yet another insightful, educative piece on CORRUPTION. Everyone who understands the need for a turn-around has to read this, knowing that corruption is a poison which has been spread in the mind of wrong people of the society, community and country. It is the mistreatment of public resources just for getting some unfair advantage to fulfill little wish. It is concerned with the unnecessary and wrong use of both power and position by anyone whether in the government or non-government organization.


Check out what Nathaniel Bassey has to say;

I laugh when I see and hear the average Nigerian talk about corruption. And calling for thunder, fire and hailstone to rain on corrupt government officials. The truth of the matter is that WE must all look inwards, first. And if we looked properly we would find different areas and degrees of corruption in our own lives and levels.
BECAUSE.....
The man that bribes PHCN to get his light reconnected is corrupt.
The woman that bribes to get her ward into the university is corrupt.
The church or organization that bribes to fast-track a process of getting something done, e.g, getting a C of O to a parcel of land is corrupt.
The fellow who pays extra to the immigration officer to get his passport out faster, without following due process, is corrupt.
The Oga or madam who will not pay his house maid when due, owing months of salary, but rather spend on his lavish lifestyle, would do so in a government institution if given the chance.
The one who jumps the red light and breaks traffic rules, could steal in Abuja if given the opportunity.
The one that bribes the custom to get certain things in is also corrupt.
The one who pays to get a drivers' license through the back door is corrupt.
The professor or lecturer who forces handouts to students just to make money is corrupt.
The student who carries expo into the exam hall is equally corrupt.
The one who settles a police officer with cash to avoid arrest is corrupt.
The one who bribes to alter his or her tax records is corrupt.
The business man that hoards fuel and other products just to sell at a black market is very corrupt.
The one who arranges a false doctor's report just to avoid some responsibility is equally corrupt.
The one who utilizes office supplies for his personal use is also corrupt.
The lawyer who knows the culpability of a fellow, yet finds a way to argue his innocence is corrupt.
The preacher that knows the source of a person's I'll gotten wealth, yet receives the money as tithes, offerings and seeds is corrupt.
The youth corper that arranges to rework his posting through the back door is corrupt.
The retailer that sells substandard products for the price of the original is corrupt.
And the list goes on and on.
If we are sincere, we will agree that each and every one of us is guilty of at least one of these and more. And if so, lack the moral grounds to speak against those corrupt government officials.
And make no mistake, we must hold those in political offices responsible, demanding accountability and justice. And bringing corrupt officials to book. But nevertheless, we ALL, in our own little corners and spaces, must endeavor to fight corruption - remembering that those in glass houses don't through stones.
Corruption then becomes a collective responsibility to fight if we would make any meaning progress as a people.