Cyude is one of the fast rising Gospel artistes in Nigeria and abroad. He is a member of the Believers Loveworld Incorporated popularly called Christ Embassy and a vital member of the group called the BLW RAP NATION, which is also a group widely known in the church worldwide. 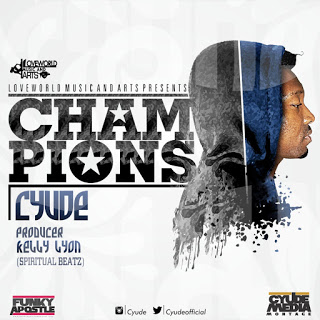 "Champions", is his first official debut single. Produced by the renowned hit maker Kelly Lyon (who recently unveiled his KINGING apparel). The song is an upbeat Afro-Pop tune with lots of guitar flares to keep it rocking. No matter what you have been through, no matter where you have been, always know that as zionites all of us are CHAMPIONS.

Born Charles Arinze Nwabude. He is from the South-Eastern part of Nigeria (Anambra State). Cyude has been singing for as long as he knew what music is all about but featured mostly as a pianist in his church thereby making people feel he is just an instrumentalist, until he featured in the song done by his wonderful group in the just concluded International Music Concert in Christ Embassy, in a song “ARRIVAL” which introduced Cyude the singer.

Cyude has shared the stage with renowned Gospel artistes both in Nigeria and abroad. Currently, he is the keyboardist to the renowned international worship leader SINACH, with whom he has performed alongside with in Nigeria, South Africa, Uganda, Ghana, Cameroon, Europe and other parts of the world.