NEW MUSIC: Munachi – Onye Mmeri [Feat. Nolly] + Justified [The Mixtape] | @Munachi4u
MUNACHi is finally out with his latest offering “Onye Mmeri” featuring Nolly of Christ I Abide (CIA) and his mixtape – “Justified” –  which has been in the works for a while now. Ever since he officially debut into the Gospel music scene with “Onye Ne Dum Ije” in May of 2014, he has announced that he will be releasing a mixtape and an album. MUNACHi is glad to finally share the mixtape with you!
He followed up the 2014 May release of his first single with an October release of 2 singles off the “Justified” Mixtape namely street anthem “Chimsom” and Techno Pop fusion “Authority” 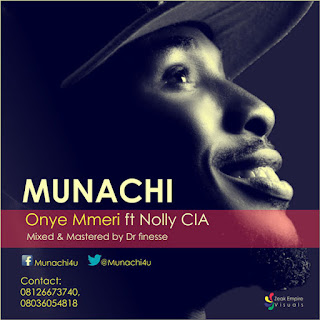 Now, you can share in the justified experience as MUNACHi brings the whole mixtape to your ears and spirit. Every song in the mixtape carries a significant message.
A former secular artiste under the name “Chinchilla Wene” with a thriving career haven worked with J.Martins, Wizboy and has a popular hit, “Ogwuazu,” to his credit as a member of Enugu’s famous JT’Boys, till he gave his life to Christ and became a Gospel music minister
Checkout the “Justified” mixtape below
Tracklist
01. Ebube Dike
02. Because He Came
03. Ebenezer
04. Authority
05. I Pray
06. Chimsom
07. Ihe imere dinma ft Amaka
08. Born Again ft Vokalin
09. Justified ft EL Gozzy
10. Bless You
11. Celebration
12. Thank You (Never Forget Y`all)
Connect:
Twitter: @Munachi4u  @Nolly_CIA
VISIT THE ALBUM PAGE HERE
OR
DOWNLOAD FULL ALBUM HERE
Download Munachi