Following the successful release of "My Way" which got huge acceptance in united kingdom, Nigeria and beyond, Andrew Bello is not resting. Andrew Bello drops his highly anticipated single "Never Be The Same". 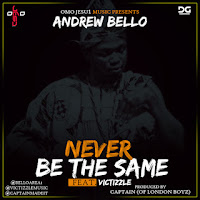 After a successful 2014, The multi-award winning artist and ambassador of contemporary Afro Gospel music releases his first single of 2015. At his one-man show back in February 2015, he performed 'Never Be The Same’ for the very first time and the response from the crowd was incredible. It had people saying this is going to be the Afrobeats Track of the Year.

'Never Be The Same’ is set to blow Africa & Europe by Storm. This is the first single from Andrew Bello’s E.P which is due for release late early 2016.