StephREDD released her soulful debut single “A Li’l While” to rave reviews in April 2015, and has been favoured by bloggers, OAPs and growing fans. The single with the thematic preoccupation of strength in the face of adversity has also raked in quite a number of testimonies and StephREDD has furthered the impact of the song by releasing a simple sing-along lyrics video to aid the acquaintance of the song by those who have been, and are still going to be inspired by the beautiful song. 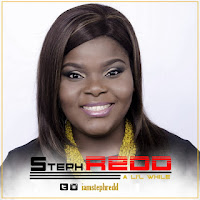 The single with the richness of Negro spiritual music was written by StephREDD in 2009 haven had to ‘wait’ a while’ herself in a place of uncertainty, confusion and fear of the possibilities of the future. StephREDD strongly believes that nothing is impossible to whosoever would believe enough, work-hard enough, pray enough and just ‘wait’ in position long enough to see the anticipated best come.

StephREDD (real name - Stephanie Kadiri) is also a Bilingual Human Resources Professional with several local and international certifications. She is a compelling communicator, an impactful trainer, public speaker/compere and a writer. She is currently one of the lead vocalist at the House on the Rock Church in Lagos, Nigeria.

“A Li’l While” was produced by Rotimi Akinfewa a.k.a. Rotimikeys